The holy city of Jews, Christians and Muslims 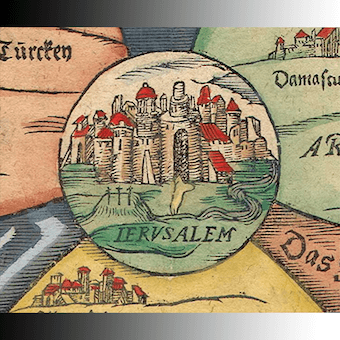 Many cultures have met here since ancient times. The holy city for Jews, Christians and Muslims was founded by the prophet David. The three monotheistic religions, which go back to the common prophet Abraham, have warred here, but have also often lived together in peace.

Under the rule of Babylonians, Romans, Byzantines, Arabs, Seljuks and Ottomans, the city was also the target of the Crusades.

Many epics, such as the Gerusaleme Liberata by Torquato Tasso (1544-1595), tell heroic tales of chivalry from a Christian perspective about the Crusades, which served as a model for many Baroque operas (e.g. Handel's Rinaldo or Gluck's Armida). From the conquest of Constantinople in 1453, the Ottomans enter the focus of world history. Later, their efforts to expand westwards as far as Vienna brought not only the "fear of the Turks" but also the "Alla Turca", the Turkish fashion, to Europe. The empire of the ruler over the faithful extends over 3 continents. Thus, Jerusalem was also conquered in 1516 under Sultan Selim I. During World War I in 1917, the city's ruler surrendered the city to the British without a fight in order to prevent the destruction of the historical sites. 400 years of Ottoman rule meant a great influence of Ottoman culture in this part of the world.

In 1493, the Ottomans under Bajezet II, (there is an opera by Vivaldi entitled Bajezet), had accepted the Sephardic Jews expelled from Spain by King Ferdinand II and Queen Isabella I into their empire. The Sultan issued a decree welcoming the Jews throughout the Empire and thus many persecuted Jews from Europe were able to emigrate to the Ottoman Empire. Istanbul, the capital of the empire, had been a cosmopolitan city since the Byzantines, where many cultures and religions met and lived. The Ottoman leadership cadre, the vezirs, also included many Christians and Jews, such as Gazanfer Aga (a Venetian) who went from being a court page to Sultan Selim's closest advisor and friend, or Kiliç Ali, a Calabrian who was the Sultan's admiral during the reign of Süleyman the Magnificent (1494-1566) and made the Mediterranean unsafe. This corsair appears in some Italian cantatas of the early 17th century. (e.g. Canto Fatima a cantata by an anonymous composer around 1600). The Polish musician, clergyman and Huguenot Wojciech Bobowski (1610-1685), who fell into the hands of invading Tartars in eastern Poland and was sold as a slave to the Ottoman court, writes in his book about life in the seraglio, where, like him, many Jews and Christians served at court. Wojciech later converted to Islam and called himself Ali Ufki. It is to him that we owe the transmission of Turkish music from this period. Compositions from his pen are also included here.

The CD "Momenti d'amore" does not offer breakneck coloratura. Francesca Lombardi Mazzulli does not need them to prove her ability. There is also a complete lack of ostentatious baroque festivity. Quite unspectacularly, the focus here is on quiet tones that speak of sensuality and poetry, rich in colour and with oriental flair. BR Classical Music broadcast. With Turkish fashion, not only coffee, spices and fine yarn arrived in Europe, but also the Alla Turca in music. Operas such as Solimano by Hasse, La Dori by Cesti, Vivaldi's Bajezet and of course Mozart's Abduction deserve special mention here.

An amalgam of cultures is emerging throughout the empire, including Jerusalem. What is special about Jerusalem is the philosophical and religious aspect, which emphasises the uniqueness of this city. Oriental-Turkish-Mediterranean cuisine, music that the trained listener can actually only distinguish by language and the common roots of Jews, Christians and Muslims in this city show that Jerusalem is the cradle of many cultures.

The pilgrimage city for Jews, Christians and Muslims

CD was produced in cooperation with Heidelberger Frühling and SWR in Heidelberg at the end of March. Release end of 2017